Vote TODAY for a MSJDNer as Military Spouse of the Year

Seven talented MSJDN members are among the newly announced nominees for the 2016 Armed Forces Insurance Military Spouse of the Year. Join us in congratulating Katherine Goyette, Emily Macey, Ashley Ludovicy-Donahue, Michelle Mance, Anna Rabe, Leigh Searl, and Natalie Wilson on their nominations highlighting their professional accomplishments and service to their communities. The first round of voting lasts for only 24 hours on January 21st, so don’t wait!

Katherine Goyette: Katherine is currently working in Pueblo, Colorado as a Deputy District Attorney specializing in domestic violence cases. Katherine was appointed as co-chair of the Diversity Committee of the Kansas Bar Association and is actively involved with MSJDN, serving on the board as Treasurer-Elect and helping with rule change efforts in Kansas. Katherine is an avid runner and has completed multiple long-distance races, including an Ironman 70.3. Last October, she ran the Army Ten Miler in D.C., while her deployed husband completed a shadow Army Ten Miler run. As if all of that isn’t enough to keep her busy, Katherine and her husband recently adopted their second dog, an 8 week old puppy!

Ashley Ludovicy-Donahue: Ashley met her husband in law school in Boston in 2010. After getting married and relocating for his Army obligations, Ashley struggled at first with unemployment and underemployment. She ultimately found employment as a Legal Assistance attorney at Fort Myer, VA. While her husband PCSed to Korea, Ashley took a position with the Army’s legal career program and now works as the manager of the Army’s military spouse resume database for The Judge Advocate General where she facilitates the noncompetitive placement of military spouse attorneys in legal positions. Ashley is a long-time MSJDN member and volunteer who has worked tirelessly on multiple committees and is currently sitting on the Board after serving as Treasurer during the 2014-2015 term.

Emily Macey: Emily and her husband grew up as friends in a small town in Western New York. He joined the Army and Emily pursued a law degree from the College of William and Mary. She practiced labor and employment law in Buffalo, NY for several years before reconnecting and marrying in to the Army family. Emily is currently work for the Legal Assistance office at Fort Wainwright and volunteers for MSJDN with the rule change effort as the Alaska State Director. She has also volunteered as treasurer of her FRG, is part of the Fort Wainwright Community Spouse’s Club, the Running Club of the North, and an alumni ambassador for the College of William and Mary School of Law. Emily also keeps busy assisting with her children’s hobbies and sports teams.

Michelle Mance: Michelle is a Navy spouse currently working at a small law firm in Anacortes, Washington. In the past year, her husband returned home from his second deployment, Michelle graduated law school with honors, and they PCSed with their son to Whidbey Island from San Diego only three days after her graduation! After relocating, Michelle took and passed the Washington State Bar exam, started her first job as an attorney, and rounded off the year by running her first marathon (the Marine Corp Marathon in Washington, DC). Michelle volunteers with the MSJDN Communications Team and is adjusting to the Pacific Northwest after spending several years in the San Diego sun!

Anna Rabe: Anna is an Australian Army veteran and an Air Force spouse currently residing in New Mexico. She serves as the Executive Director for Ninth Judicial District Family and Children’s Court Services Inc, a non-profit supporting children and families engaged with the local courts. In her role as Executive Director, Anna supervises the CASA program, recruiting and training Court Appointed Special Advocates who advocate for the needs of local children in foster care as a result of being abused and neglected. Anna is a Key Spouse, a Rotarian, and a member of the MSJDN Writers Corps. You might have seen her on Funniest Home Videos trying to cross a see-saw on a motorcycle!

Leigh Searl: Leigh is an attorney and founder of America’s Career Force, which focuses on the D.R.E.A.M.S program (Discovering Remote Employment for America’s Military Spouses) and advocating for companies across America to Hire Just One military spouse for remote employment. Leigh has been a military spouse for 13 years and relocated 10 times but continued to retain a professional focus, even when the Army moved her family to Germany and Ft. Leonard Wood, Missouri. She had her second child while her husband was deployed and nursed her 10 day old newborn during law school finals!

Natalie Wilson: Natalie is an Air Force spouse, mother of three young sons (8, 3, and 4 months) and a commercial bankruptcy lawyer in the San Antonio office of Langley & Banack, Inc.  She is an active member of MSJDN, currently serving as the Treasurer, chair of the Awards committee, and on the Writers Corps and membership committee. Additionally, Natalie is a founding member of Moms-In-Law San Antonio and serves as the Articles Editor for the San Antonio Lawyer Magazine. Natalie volunteered as the Keyspouse for the 624 Operations Center and is now active in the spouses’ group for the 92nd Cyber Operations Squadron. In 2014, Natalie received the prestigious Belva Lockwood Outstanding Young Lawyer Award from the Bexar County Women’s Bar Association. She is a nominee for the Air Force Association’s Joan Orr Spouse of the Year Award and a member of the 2016 San Antonio Business Journal’s 40 Under 40 class. 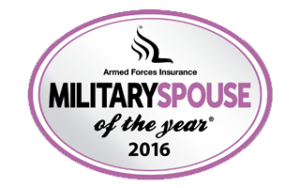 The first round of voting takes place today only, so don’t wait! Vote now to support a military spouse attorney!